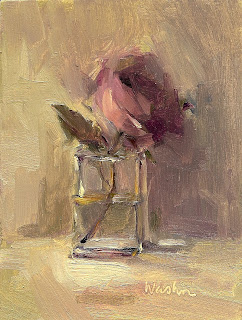 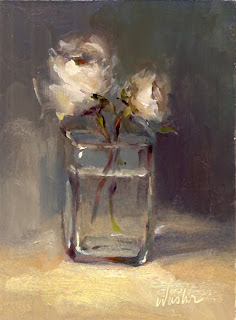 I've been looking a lot at Stanley Bielen's paintings. He had one that reminded me of Manet's late flowers. This was from a few days ago. Did another one yesterday and plan on doing more.
4x3 oil on board.
Posted by Joyce Washor at 3:02 PM 2 comments: 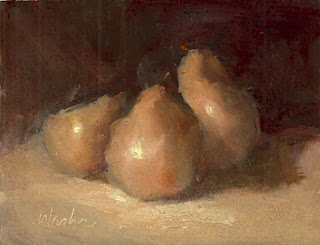 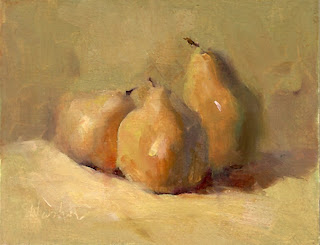 I wanted to warm up the paintings so I applied a combination of a few warm reds with a painting medium. Before I remembered that it's best to use transparent colors I had applied some Indian Red. When you're applying a glaze you can easily wipe it off if you don't like the color. My next choice was Permanent Rose which worked better. I was taught this technique a long time ago but never really came upon the need until I scanned these and saw that they looked so much better being redder. The scanner had rendered them so much warmer than the originals! (Don't you hate when that happens?- On the bright side, it did give me opportunity to expand my painting options!)
Posted by Joyce Washor at 9:09 AM 2 comments: 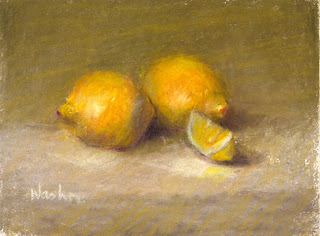 When I was shopping for the lemons I tried to pick out the warmest ones. I always like warm paintings as opposed to cool ones. I couldn't find lemons as unlemony as I wanted so I just added more orange! I tried to keep them as lemony looking as possible without the green. Maybe the green in the background helps and the neutral tabletop.
"Lemons" pastel on board, 3x4 inches
Posted by Joyce Washor at 5:52 PM 5 comments: 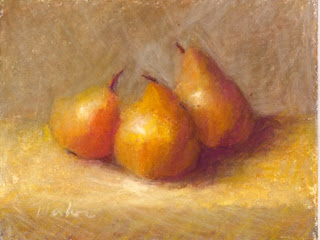 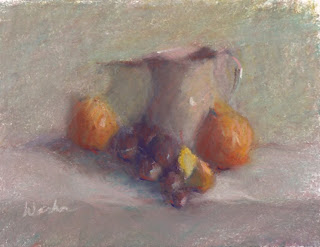 These are done on a board by RTsTx that can handle pastels or oils or oil pencils. Pretty amazing stuff. I've tried them all. I didn't have much luck with the oil pencils but the other two medium worked well.
Both of these are 3x4 inches.
Posted by Joyce Washor at 5:39 PM 2 comments: 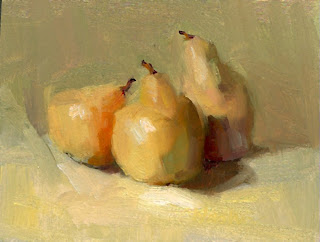 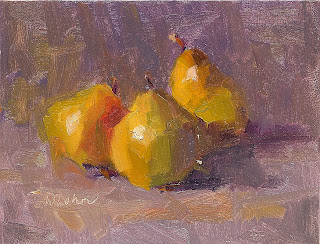 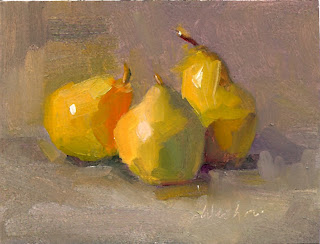 In keeping with my yellow fascination I was attracted to some pears at the local food store. The top painting was done last and after I had gone to see some George Inness painitngs at The Montclair Museum (where great Cezanne exhibit was reason for going). Love his work. Especially the later pieces which are so Wolf Kahnish. There were a few tonal paintings with a florescent orange sunset that just knocked my socks off. I had met a friend Laurie Pace who is also a good painter and she lent me a video by Gregg Kruetz which my husband and I watched that night. I woke up inspired to try a technique of his ( which I really couldn't incorporate into my work) but it got me to painting so that's always good. Anyway, the point I'm trying to get to is that I thought I was doing a Kruetz painting but was really more influenced by Inness because I saw the orange in the left pear as a sunset! Funny how we're influenced and don't even know it.
"Inclined Pears" 3x4 inches. oil on board
Posted by Joyce Washor at 3:22 PM 6 comments:

A friend of mine, Mary Jean Weber is organizing a trip to Umbria, Italy. Unfortunately I'm not able to attend but I thought I'd publish info in case someone else is interested.
Artists Abroad Presents a return to incredible Umbian Hill Towns: An Italian adventure in paintitnd and exploring ancient perched villages. A non-instructional painting trip- May 23- June 6 2010. #3500 for two weeks. Contact Mary Jean at mjw@principia.edu 513-697-0852.
Posted by Joyce Washor at 1:33 PM 1 comment: 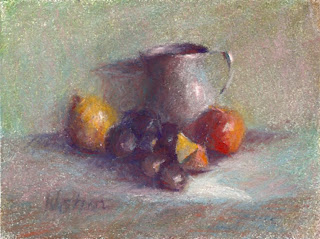 Snuck in this pastel in between my yellow fixation. Pastels are great cause you can leave them for days and come back and they're just the way you left them! No changes in color as oil dries.
3x4 inches, pastel on board.
Posted by Joyce Washor at 11:28 AM No comments: