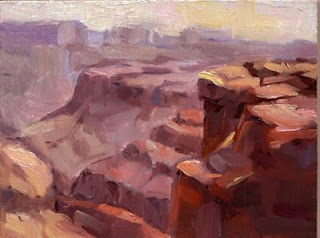 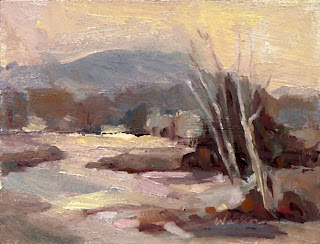 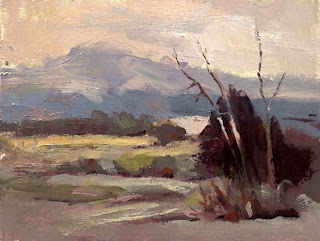 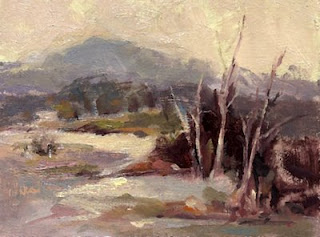 It was great fun to paint over some starts that I had used as steps for my book. (I wasn't good at photographing small wet paintings in progress so I stopped as different stages in the painting process and had them professionally photographed when they dried.) I liked the freedom of having a few paintings going at the same time thinking that at least one of them would be gallery worthy!!
Posted by Joyce Washor at 9:37 AM 4 comments: 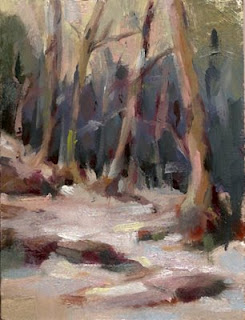 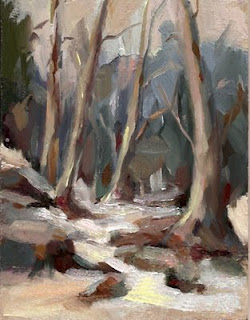 I had done some steps for the oil painting book and then sold the last step. So I had a few starts in different stages of progression. I decided to try and finish the paintings which meant I had to paint over paint. After all these years it was the first time for me. I think it worked out very well. Only difference was that I couldn't scratch my signature onto the board.
I think you'll probably see more posts like this in the near future!
Posted by Joyce Washor at 4:14 PM 2 comments: 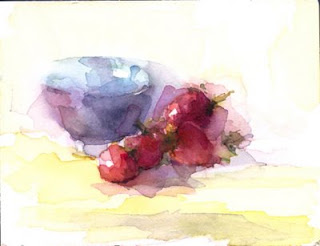 I was at The Guggenheim last week and saw a Cezanne. On the card next to the painting it mentioned that he used white cloths on his tabletops a lot. Well, if he can do it so often so can I. It's funny how we have to feel vindicated somehow before we feel free enough to do it ourselves. I find these little bits of freedoms from museum visiting more valuable than looking at the art.
"Strawberries and Blue Bowl" 3x4 inches watercolor.
Posted by Joyce Washor at 7:41 AM 3 comments: 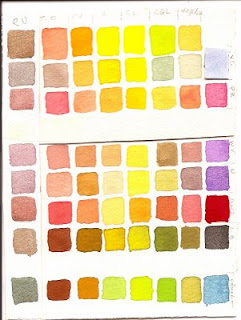 The yellows are across the top and the purples are down the right side. I eliminated one purple color which is why I pasted a blank piece of paper over it. I placed the Prussian Blue off to the side since its optional and only used on rare occasions to get some greens.
Yellow/Purple Palette:
WN Chinese White, Schmincke Blue Black
Yellows: WN Naples Yelllow, Old Holland Cinnabar Green Extra Light, WN Cadmium Lemon, WN Aureolin, , WN Cadmium Yellow, Schmincke Translucent Orange, Rowney Georgian Raw Umber
Purples: Old Holland Violet Grey, WN Permanent Rose, WN Permanent Magenta, WN Winsor Violet, WN Ultramarine Violet, Permanent Alizarin Crimson, Prussian Blue is optional
Posted by Joyce Washor at 9:47 AM No comments: 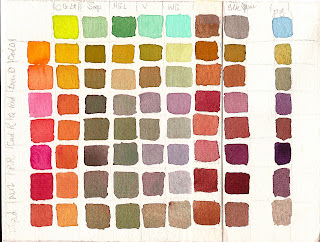 I went to Pearl Paint recently and looked at many different tubes of Raw Umber by many different manufacturers and saw that Daler-Rowney Artists' Raw Umber is the greenest one. I was so happy. It was like Christmas. I'm sure you've had that feeling. The Raw Umber I had been using was Winsor Newton and it was way too red for my liking.
My reds are along the left side going down and my greens are on the top going across. The raw unber is the sixth one from the left on top row. It goes down. I mix it with each of the reds. I highly recommend this exercise. And then you can save the chart as a handy reference for mixing color!
I use raw umber in the yellow/purple palette also. I will most likely post that next.