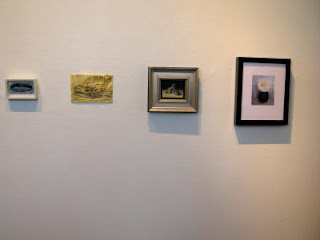 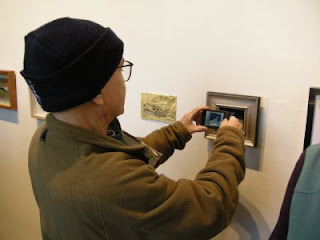 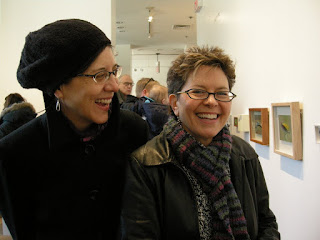 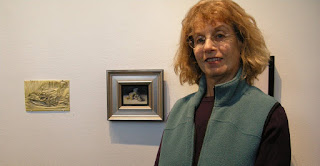 The show is at 80 Washington Square East Galleries until March 13th here in NYC. I liked the way they hung the show. I'm 5'6" tall so you can see the work is about 5 feet from the floor. There were seven galleries and about 200 pieces. Very popular show. My piece is in the first gallery which is visible from the street. Friends came by. Also one gentleman who seemed very interested.
Posted by Joyce Washor at 7:28 PM 5 comments: 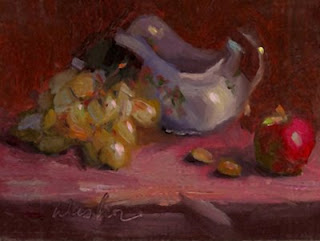 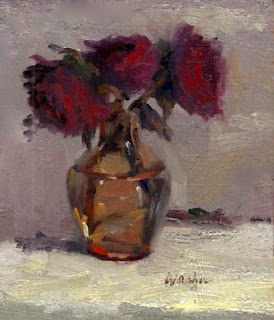 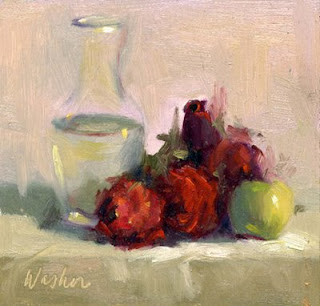 When to Use Which (Palette) 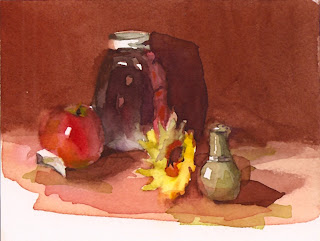 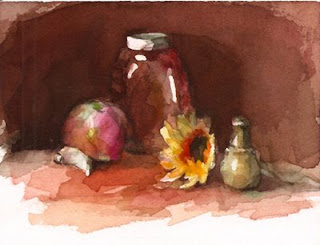 A new friend in Holland (email is great and so is art; it allows us to be touched by each other in great ways!) asked me how to decide which palette to use and if one or the other is better for still lifes, portraits or animals.
Answer: you can use any of the palettes for any subject matter. It depends on the color that's NOT there. Let me explain. If there's a blue color in your subject you wouldn't want to use the red/green or yellow/purple palette because there's no blue in either of those palettes. If you have a bright yellow in your subject you wouldn't use the red/green palette because there's no yellow in the palette.
Now the answer can get a little complicated because you can mix a yellow from the red/green palette but it won't be a bright yellow. It will read as yellow because it'll be the closest thing to yellow in the picture.
These three watercolors were done with each of the palettes. Top one is o/b, middle one is y/p and bottom one is r/g.
Posted by Joyce Washor at 2:17 PM 2 comments:

How to Exhibit Small Paintings 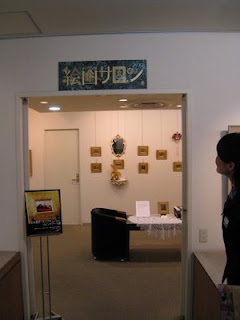 A friend from Wales emailed asking about my experiences hanging my work. So, I thought I'd answer on my blog:
Yes, I have exhibited small paintings on table easels and on the wall singly and in groups. I've sold whole groupings of paintings because they were hung that way. It usually ends up being at the discretion of the gallery owners. Here is pic from a show in Japan. All the frames are the same but I can't tell what the three dimensional thingy is among the paintings....Anyway, I don't think it's a good idea to frame them to small and then not have them attached to the wall in some pocket proof way. I've had one lifted. Thankfully the gallery paid me for the painting! Insurance is a good idea for small paintings. I've passed on many exhibits because they didn't provide it. Another way to attack the insurance problem is to make sure you talk about in your consignment contracts. I guess it depends on the frame and how it looks in each individual space. I'll take pics of the Small Works Show next week. Maybe that will give you some ideas.
Posted by Joyce Washor at 1:43 PM 3 comments: 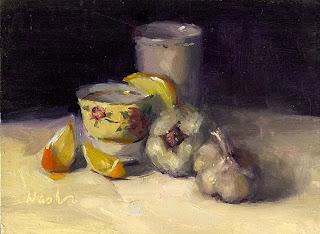 I haven't entered a competition in a really long time mainly because most of them are to raise money for the gallery and not to promote artists. Since moving back to NYC in '04 I've had my eye on Washington Square Galleries' annual small works competition. Usually I read about it ahead of time and then "forget" about it when it comes time to deliver the work. Or I'd rather stay home and paint if I'm in my painting mood. Then I console myself by saying, well next year.
So, I'm happy to report that my piece has been selected and the opening is Jan 31st from noon til 4. Show runs through March 13th. If you're in the neighborhood please drop in!! Address is 80 Washington Square East. It's by 4th Street. Phone is 212-998-5747.
Posted by Joyce Washor at 1:19 PM 1 comment:

I've given myself a challenge of doing the same set up in both oils and water colors. The post a couple of days ago was in oil; this one, w/c. Certainly keeps my mind hopping.
Honey Jar and Sunflower, 3x4" w/c, POR
Posted by Joyce Washor at 2:13 PM 3 comments: 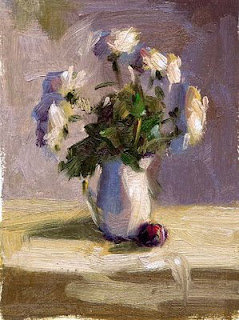 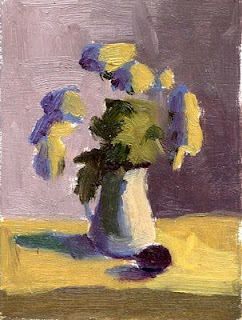 I got my favorite kind of email today from someone in the U.K. He was thanking me for writing the book and telling me of his plans to paint and exhibit his small paintings. It's a great feeling to be able to help someone with their artwork.
He also pointed out a weak link in the book (or I should probably say one of a few weak links in the book). So I decided to answer his query on line so if someone else was wondering the same thing ....
The continuity of color is off on the painting steps on page 65. There are two reasons. One is that the printer didn't do a good job in the reproduction; the images in this post are what I had submitted. The book version is really off. The second reason is that I had to paint all the steps separately for photography purposes. In other words I had three panels going at the same time. I stopped each one at different stages , let them dry and then let the photographer photograph them. It was easier to keep the continuity between the steps on some of the paintings but obviously not all.
I talk about spending a lot of time premixing my colors. I do think I've gotten faster at it but when I wrote the book I did spend probably 20 minutes on each color. And because I squint I would go for a darker version of the color. I would invariably end up with a few versions of each color that I was going for. For example, for the background purple I would end up with warmer, cooler, darker and lighter piles. then I would either use some or all of the versions in the painting. This comes in quite handy since more color variation is a feast for the eyes. It also helps describe depth and volume more accurately.
Hope this answers the first two questions in your email. I'll get to the others later!!
Posted by Joyce Washor at 12:26 PM 2 comments:


It's funny how paintings get made. Well, I can only talk about my paintings really. I was reading American Artist Magazine and was inspired by a dark green painting with a single tomato bookended by two pieces of garlic. It was an add for a school which said, "classical instruction for a new generation of old masters". I got my red/green palette ready and mixed a dark green. I can't remember what else I put in the set up and really don't want to look at it again (ever) but I know I didn't like it. Next thing I knew I turned the green into red and got this painting. It turned out to be a study in reds. One accent; the yellow sunflower. I think some people just see and maybe are comfortable with a portion of the color wheel.
"Still Life with Honey Jar and Sunflower", 3x4 inches, oil on board, POR
Posted by Joyce Washor at 2:02 PM 1 comment: 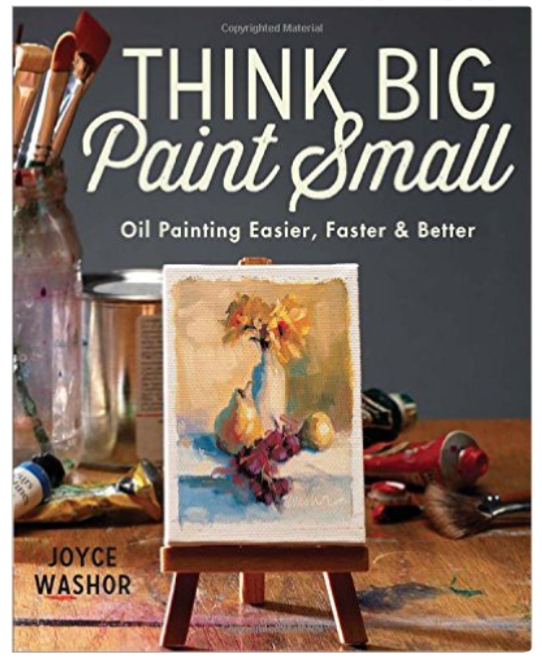 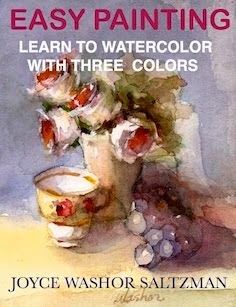 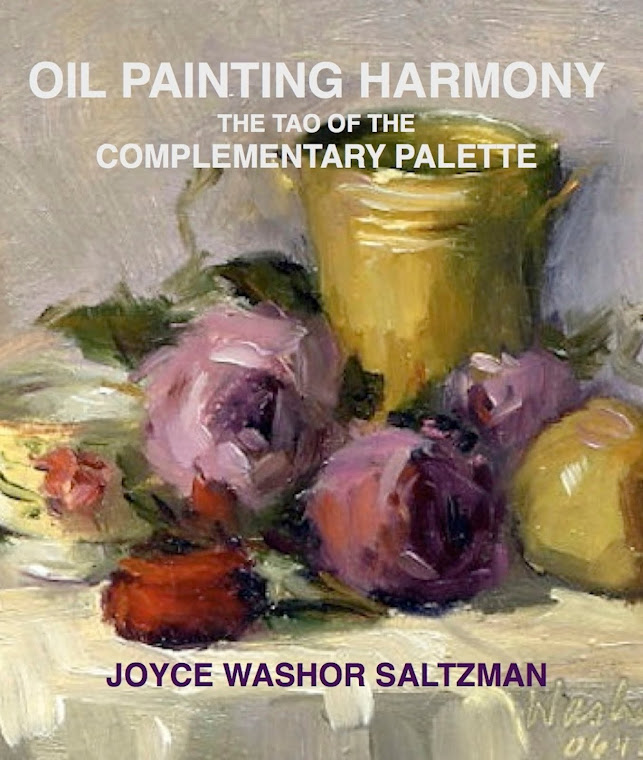 Dariya from Russia said after reading PDF, " I read a lot of books about aquarelle. All of them, both expensive and not so expensive gave me no clarity about how to work with paints, to choose paint for specific works. I thought the aquarelle technic is a secret knowlage and professionals don't want to share it. The book answers my basic questions and gave me a confidence that I'll achieve good results. Reading the book and asking 'how' I've got the answer on the next page. I really sure that the author sincerely wants to share her knowlage and do it in understandable way. Between the lines I can read "You can and you'll do. Don't be afraid and try", this is the one of main principles of teaching. So even I've already read the book I open it again and again, look, think and train of couse :)"